The Yellow River is the sixth longest river in the world and the second longest river in China (only after the Yangtze River), with a total length of 5464 km and a catchment area of 742443 km2. Originating in the Tibetan Plateau, the Yellow River washes away large amount of silt after passing through the Loess Plateau and becomes the most sediment-laden river in the world. The Yellow River is the birthplace of the ancient Chinese civilization, and is thus called “Mother River” by Chinese people. However, the Yellow River was also extremely prone to flooding and course changes in the past, and has caused many severe disasters historically.

As a result of frequent avulsion of the river course, the Yellow River Delta (YRD) has experienced dramatic changes in the past two thousand years. Since the mid-nineteenth century, however, the lower reaches of the river and the delta have been extensively engineered to control flooding and to protect coastal development. The present delta is located in the northeast of Shandong Province. It covers a total area of 18000 km² with a population of 5.2 million people. Due to the large quantity of silt carried by the Yellow River, the delta extends into the sea at a rate of 2.2 km/year with a land accretion of 3240 ha per year. The YRD is also rich in natural resources, with the second largest oil field of China (the Shengli Oil Field, >4.6 billion tons reserves) situated in the delta. Industrialization and urbanization of the delta started with the oil exploitation and intensifies in recent years. At the same time, the YRD contains important wetland ecosystem, which is the habitat for numerous species, including millions of migrating birds of which many are under protection. 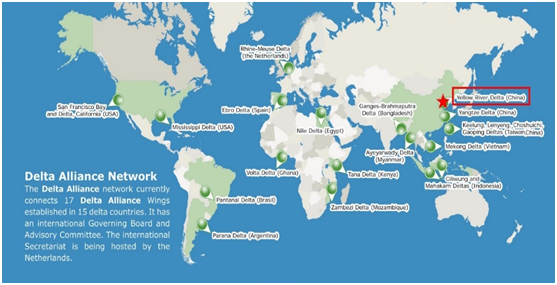 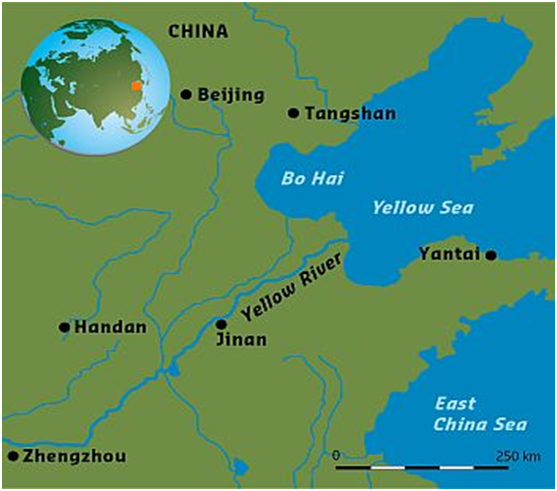